Bradley Hall – How can the North East Level Up? 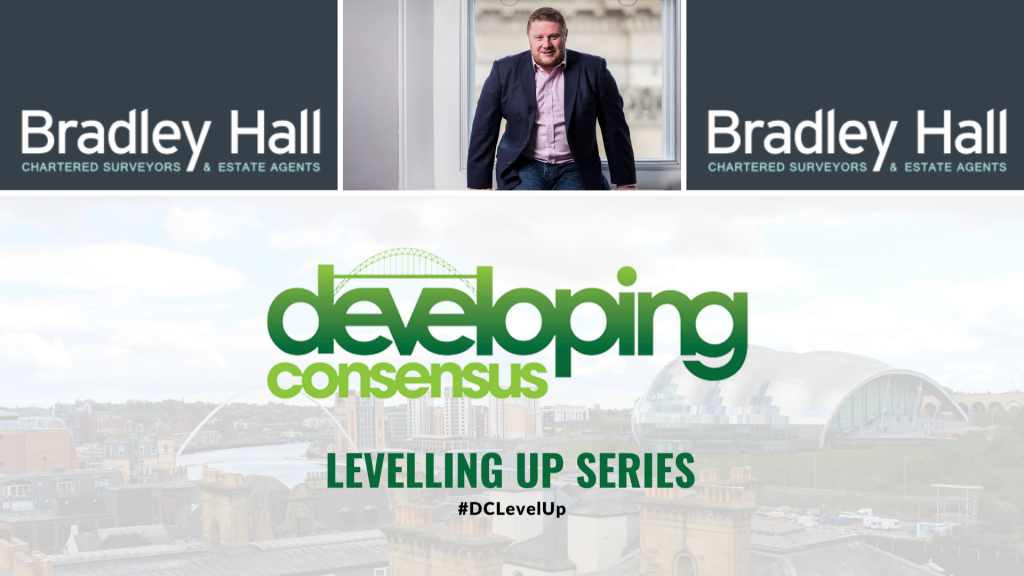 As part of our levelling up series, we’ve been asking members to share their thoughts on levelling up, how they define the term and also what the region’s first steps should be in order to level-up.

Do you feel the North East economy has increased, decreased or stayed the same during the pandemic?

There were obviously challenges during the pandemic with economies around hospitality and retail being impacted the most, however, it doesn’t appear that the momentum being the plans to change our built environment have particularly wavered.

Restrictions made business more challenging, but activity in the property industry continued. A significant uplift in sales in the residential market was encouraged by the Stamp Duty Holiday, resulting in the busiest year for the industry since 2007.

Opportunities for investment throughout the North East carried a steady stream of significant commercial deals. The commercial and residential property industries provide a solid foundation for our economy and support a range of direct, indirect and induced jobs.

How would you define levelling up?

Generally there is a lack of clarity when it comes to the levelling up agenda actually means. Levelling up has been referred to as ‘rebalancing the economy between soar-away London and the rest of the UK’ – so in theory, levelling up means for us ‘lower performing’ regions to catch up to London. In reality though, do we really want to emulate the ‘success’ of London, an area with severe inequalities from borough-to-borough, with economic and social deprivation arguably considerably beyond what we experience outside of the capital.

All of the above, plus more, is needed in the North East to improve our built environment to create better working, living and socialising opportunities for our communities.

The North East has one of the lowest GVA per head in the United Kingdom, why do you think that is?

It is essential that local authorities really drill down to find out what the opportunities are to support the upward trajectory of our region’s GVA. Previously, our local authorities seem to have only asked the questions to influence the feedback which would be useful to their own agendas, instead of finding out real opinions which would provide the information needed to create a better environment for us all which would lead to better productivity and an ultimately higher GVA.

It is also important to add that different areas throughout the UK play different roles in the national economy. The North East is becoming a vibrant hub of opportunities across a number of key sectors but undoubtedly there is still much to do – however it does seem like we are moving in the right direction.

The way the data is analysed is undoubtedly a key factor in the GVA calculations. High value firms and jobs with subsequent increased levels of productivity often come from urban areas. Although the North East does have its established capital of Newcastle-upon-Tyne and emerging cities, much of the area is rural.

What are the first steps the North East should take in order to level-up?

Strategize and plan which elements will provide the foundations for future growth and development, which projects will attract funding and create future opportunities. Futureproof the process, create responsibilities and listen to what our communities need to level up.

Transport obviously plays a big part in levelling up and many Local Authorities are improving options, but it is important not only to think about public transport but to thin about how the professional services industries rely on city centre parking options. It is incredibly important for businesses people, especially those working in the professional services industries to get to and from meetings efficiently. Pedestrianizing city centres and especially central business districts leads to lower productivity for those who occupy those spaces. Equally, maintaining convenient parking for shoppers in city centres will also encourage more trade.

The North East has been taking steps to level up for some time now. Local Authorities such as Sunderland City Council are leading the way in terms of major projects, inward investment and the investment of £270m throughout 2020/2021 – with a total planned investment of £450m over four years.

How can the government empower local authorities to level-up?

Develop and communicate clear objectives of how to tap into the levelling up fund and developing coordination and action between central government, local government and mayoral authorities will provide a clearer pathway and empower local authorities to be able to meet goals.

Do you think the £4.8bn levelling up fund will achieve its goals of supporting the regeneration of our town centres, high streets and upgrades of our transport system? If not, what would you suggest?

Financial support is obviously helpful, but then it will depend on how it is used. High streets need to adapt, diversify and innovate in order to be sustainable and to futureproof. Social hubs such as STACK Newcastle and Seaburn are thriving because it’s something different – spending habits have changed and many are looking for experiences rather than just a trip to the shops. Upgrades in the transport systems will only work if there are destinations that people have a want or need to visit – meaning that again it comes back to built environment and the opportunities it presents.

I mention this again as I think it’s very important that transport within our central business districts is thought out sensibly and that local authorities look at mistakes like the pedestrianisation of Grey Street and the impact that will have in future. Professional services organisations will certainly be put off from occupying city centre space in future as our workers and their clients will struggle to access offices within the city centre efficiently.

To give your opinions on Levelling Up, contact Katy Moody by e-mailing katy@sharpmediagroup.co