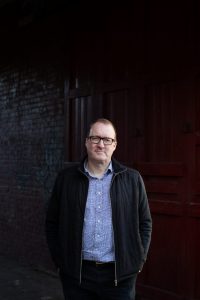 Published by kind permission of the North East Times.

Tim Bailey, founder of Xsite Architecture and chairman of RIBA North East, talks to Alison Cowie about his design ethos and why he believes the challenges facing the region’s architects are best addressed via its professional body.

Growing up in Hartlepool in the 1970s – the eldest of eight children – Tim Bailey developed a love for the sea. But when his dad told him he would not support his naval ambitions, the 14-year-old turned his attention to another developing passion.

“I had become fascinated with dimension and space – which I now know was ergonomics,” explains Tim. “I did a measured survey of my house without knowing what I was doing or really having a reason to do so.”

Tim studied architecture at Newcastle University, during which time he spent a year as a student councillor for the Royal Institute of British Architects (RIBA). It would be the beginning of his life-long alliance with the organisation.

“RIBA is the body that effectively marshals the collective thought of architects,” says Tim. “It drives a lot of policy and pushes boundaries in the ways that architects behave.

“My job as a RIBA student councillor was essentially to visit all the schools of architecture, gauge opinion and report this back to the council four times a year. It was a brilliant experience and it made me realise the value of the professional institute in putting you at the front of the conversation.”

While many of his peer group ventured to London after graduating, Tim chose to develop his architectural career on Tyneside, taking a position at Browne Smith Baker. He spent ten years at the mid-sized architectural practice, becoming a partner after seven. But the art- loving architect decided to establish his own practice in 2000 to focus on local cultural and civic projects.

Xsite Architecture’s first project was Intermezzo (what was then the ground-floor café at Tyneside Cinema) and the practice – based in the Ouseburn Valley – has since developed a stellar reputation for delivering design-led leisure, cultural and commercial developments, the vast majority of which are based in the North East.

“I have a term called ‘doorstep architecture’, which is an important way to stay closely related to projects,” Tim explains. “If it’s on our doorstep, you want to make sure it’s good. You don’t want to be embarrassed by a building you walk past every day.”

Tim highlights three key ‘doorstep architecture’ projects that represent ‘change- points’ for Xsite. The first is Boho One in Middlesbrough, a major project the practice first became involved in 2005.

“We began working with the leader of DigitalCity, who had realised the town needed an accelerator space for digital enterprises,” Tim explains.

The striking £9.2 million Boho One opened in 2009 and its success has led to seven more adjacent developments – creating Boho Zone, a digital, creative and business hub for the Tees Valley.

The second project is the Toffee Factory – based in the Ouseburn Valley – which Xsite won off the back of Boho One in 2009.

“We felt a big sense of responsibility because, at the time, the Toffee Factory was tagged as the venue that would change the Ouseburn into the obvious place to go if you were a creative or digital business,” says Tim.

The renovation of the former factory has gone on to win multiple awards and has fulfilled its objective to establish a new focus for the area.

The third project Tim highlights is Xsite’s most recent – the NE Futures UTC at Stephenson Quarter, in the heart of Newcastle city centre.

With a challenging site and pressured budget, the Xsite team had to use all its expertise to create an inspiringf state-funded technical school for 14 to 19-year-olds. The school now merges seamlessly into its former historic industrial site, and boasts an elevated walkway entrance, a multi-use presentation hall and sports facilities on the roof.

Meanwhile, Tim has continued to foster close links with RIBA and between 2016 and 2018 he was a non-executive director of Newcastle based RIBA Enterprises Ltd (now known as NBS).

In the role, he helped the institute’s commercial arm secure investment to realise its potential in becoming a global force in digital construction. Tim believes it can’t be overstated how important it is having NBS based in the North East.

“It’s critical for the region’s architecture and construction professions to have a success story like NBS on their doorstep. Not only is it a major employer but it helps make you feel like you’re part of a place that is capable of producing a world leader in its field.”

Since 2016, Xsite’s founder has also been the chair of RIBA North East (having previously held the position in the 1990s). In his most recent tenure, Tim has made it his mission to encourage more collaboration among local practitioners to share knowledge and attract and retain talent in the region.

“We’ve got to be more attractive, more collective and more open and clear about the career trajectory of staying to practice in the North East,” says Tim.

RIBA North East has established three special focus groups to address specific challenges. The first of these looks to cement the architectural journey in the region by linking members of the Young Architectural Practitioners’ Forum (YAPF) with those who are more established in their careers.

The second focus is on locally-based research to help inform national RIBA’s policy work and encouraged knowledge sharing among practices as, “the sector realises this is not about giving something away, it’s about adding something”.

The third focus group is aimed at supporting small practices by assisting them with business services such as accounting and marketing.

“Owning a small practice can be quite isolating but we have emerging small pockets of practices that are grouping together and sharing their knowledge and experiences,” says Tim.

These three special interest groups, Tim reports, have been hailed by the wider RIBA community, and similar initiatives are now being adopted across the organisation. Furthermore, Tim is working with his counterparts in the North West and Yorkshire to build stronger lines of communications in the north.

“It’s about recognising that there are differences between practices in the north and the south, and asking ourselves how we best respond to those,” the RIBA North East’s chair reveals.

As for Xsite’s future, Tim – who is a Governor at the Northern School of Art – is currently looking at ways to embed the architect’s role more into the construction process.

“The challenge Xsite is facing – along with most other small practices – is that artificial intelligence and other technological developments are narrowing architectural services to a little band of influence, early in the process. But there’s a role for design at every part of the process. We have to find new ways to augment the journey so that architects can stay more involved – whether that’s through being better client advisers, brief takers, contract administrators or project managers,” says Tim, who became the new creative director of Northern Design Festival this month.

As well as working on a new integrated design strategy for Xsite, Tim remains committed to working with RIBA and championing the North East. “I’ve got a political instinct which never goes away,” he says, “I’m also interested in making sure, through RIBA, that the North East is a better-informed region and it has a strong voice.”